Here are a bunch of words and acronyms we used to use internally, but they’ve come out in the blog over time. Note that this is a work-in-progress document that we’ll be adding to all the time. We’ll shoot for alphabetical order, but in some cases we’re gonna put a definition AFTER another definition if one was used historically before another.

ACIM (A Course in Miracles, or “The Course”): This is a book reluctantly channeled by Helen Schucman back in 1965 (published in 1975) that was actually written by Brother J (aka, Yshua). He came forward at that time, and in english, as modern english is much easier to use in getting his metaphysically complicated points across; he originally spoke aramaic, which is an agrarian language and not well-suited to the advanced spiritual concepts. All CATs are students of The Course, which is really a book of personal, spiritual philosophy written by Brother J without any linguistic ambiguity — the book Brother J always meant to inspire others to write… but they missed or misunderstood much of what he said, so… here’s J’s philosophy unfettered by language or religious committees. An advanced course in spirituality, it is not for everyone. Approved texts (approved by Brother J) are available at: http://www.acim.org.

~AM (“Angel Meowracle”): ~AM is one of the M’s and he strongly dislikes being singled out for this distinction, but it is what it is. CATs and others find the designation useful, and in some cases necessary, so ~AM puts up with it. We discovered some years ago that ~AM is different than the rest of us, in that he… well, he is a Cherubim who is either masquerading as human, or took a step down to help at this level… or it’s more complicated than that. He used to look (still looks, spiritually?) like this:

…but his appearance was freaking out the M’s (and our animals), so he concentrted on his “LION” overlay. (UPDATE: Now he looks totally different, having changed… into something rather indescribable.)

Brother J: His original name was “Yshúa,” but religious texts turned this to “Jesus.” (He was known in the East as “Isa,” from his younger days traveling with his uncle, Joseph of Aramathea.) Since the latter is not really his name, and since this name has become a bit of a trigger for some people, we refer to him as we did when we originally knew him, while we were all alive together: Brother J (though some called him “The Master”). Brother J is now a kind of ‘SOURCE filter’ or aetheric layer that anyone can call upon to add to their own beings; to date, he is spread across almost three billion people. Not bad. Think of it as omniscience-in-training. 😉

Calamari, The: Intensely nasty and at times huge aetheric beings who looked like this… 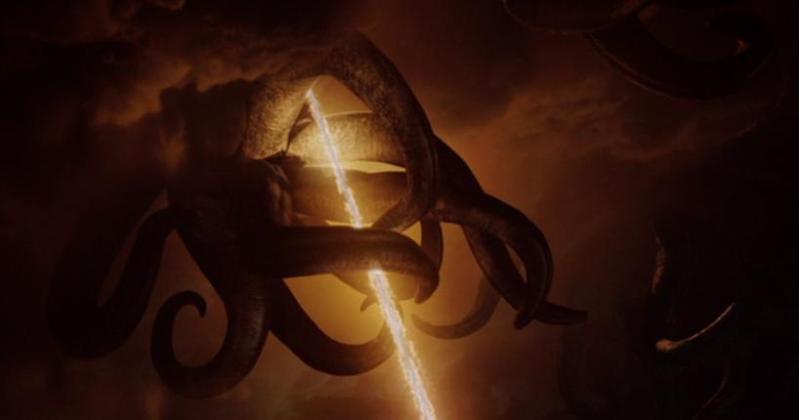 …except the ends of their tentacles were longer and came to razor sharp black points. These were some of the worst Negatives around, but the SuperFriends destroyed them in 2017. Be glad you never experienced them. There weren’t that many of them. The ones in and on the Earth were BIG as calamari go (they grow bigger as they age), with five males and one BIG female. They were ancient and had been in and around the Earth for a very very long time, and had many names (which we won’t mention). Here’s an actual picture of their ship as they fled the Earth for the moon in 2016:

The calamari could expand in size anywhere from 20 feet to several miles. We originally called them “calamari” as a code name due their general tentacle-y “Hellboy” shape (they directly influenced artist/writer Mike Mignola, but he doesn’t know it); we also called them calamari to belittle them after they attacked some of The CATs, unprovoked. They went by many names which we will not entertain here; other ultra-low-vibe ETs in the Earth have appropriated these names but are not the original article. All voodoo originated with the calamari.

CATs: Doesn’t stand for anything. Lots of us were either former feline ETs, or were trained by them in the in-between life, or are LION ETs inside a human matrix (we still don’t know how that works, but on some level we look like lion-headed humanoids to those who can ‘see’).

Coursian: A term coined by our benefactor to describe followers of The Course.

Dragons: A general term for any higher-order dragon. Dragons can be any color, and each color represents a specific talent. (We’re writing a book on dragons, stay tuned.) Dragons are awesome. ALL higher-order dragons are part of The Greater CAT Family. Dragons are not pets. They are highly intelligent and accomplished, and have been around a long time, with a complex social structure and history.

The Event: This is the general term for the whole spirit upgrade of the entire universe.

G+P+C (Ground + Protect + Connect): This is the act of Grounding to the Earth and to Gaia, Protecting via SOURCE, and Connecting to Guides, the primer for which can be found HERE.

GRBs (Gamma Ray Bursts): Extremely energetic linear bursts of gamma rays that come from all over the universe, typically the product of exotic collisions between neutron stars, magnetars, and/or black holes. What’s most interesting about GRBs is that higher-order beings can somehow track these scalar energies as they vector across the universe at near-light speed, and can code them with information, somehow knowing where they will wind up. Many messages are sent to Earth in this format.

HO/Higher-Order Beings: These are any number of Positive beings who always honor STO and SOURCE before anything else. (We can’t call them ‘HOBs’ because “Hob” is an old word for Mr. Nasty.)

Light Beings: Literally beings made of SOURCE light. There are many different kinds, but they look much like light pillars. Very advanced.

Lyrans: ETs from the various stars in the Constellation Lyra, of which there are Positive, Neutral, and Negative variants. White-headed cat ETs are Lyrans, as are blonde ETs… jeez, does it matter? Too many factions!

Mr. Nasty: The name we give to the the opposite of SOURCE. There is one main one and some sub-ones — and one composite FAKE one. All of them are to be avoided. We call all of them “Mr. Nasty.”

M’s: Stands for “Meowracle,” a (dumb) name one of the CATs coined for those CATs who had more ability and psychic ‘OOMPH’ than other CATs. Meow + Oracle. The M’s really hate this name and made the rest of us use ‘M’ instead. Oh, well.

NE  (New Earth): Where Gaia will evolve TO, hopefully taking some of us with her.

OE (Old Earth): The shell Gaia will leave behind after she goes to the NE.

Omata: A term coined by the CATs (fr. “group” in ancient greek), the omata is a greater spirit-group or spirit-team consisting of you and other sub-parts of the “greater you” (as a much smaller subset of ONE), with specific purposes throughout the omniverse. There are infinite omata. A complex subject, read about it here.

PTW (Powers That Were): Those formerly in power.

RBDs (Rainbow Dragons): One aspect of the dragon universe, rainbow dragons are the fiercest and the fastest dragons. They are the CATs’ bodyguards, and are here in force (over one billion dragons all over the place). They are highly intelligent and accomplished, and have been around a long time, with a complex social structure and history.

The RBD (The Rainbow Dragon): This is the BIG rainbow dragon in charge of all the dragons, a female this time around.

The Rip: This is how we refer to the halting, velcro-like RIP going on between the Old Earth and the New Earth.

The SHIFT: This is the denouement of The Event, when the two Earths are fully separated, and Gaia migrates from the Old Earth to the New Earth.

SBC: “Single-by-Choice”; the opposite of the omata, this is a term that for those who perhaps subscribe to the STS philosophy.

SF/SuperFriends: These are the motley group of higher-order beings who work wth the CATs and have become part of their family. They have asked us NOT to share specifics, so various beings cannot use this information against them.

SOURCE: SOURCE is SOURCE, an infinite being of great mystery, even to the most advanced higher-order beings. What some call “God.” We prefer “SOURCE” as it takes all religious connotation out of it, which is also why we refer to J, our brother, as Brother J.

Space Police: These are HO Beings who maintain order between stars systems and planets. They do not get involved in planetary affairs unless they impinge on other planets. They are very high vibration, and have NO sense of humor. (They’re kinda like GORT from, “The Day the Earth Stood Still.”)

STO (Service-to-Others): Basically, thinking of others before yourself. Wanting to help. This is a ticket to the New Earth.

STS (Service-to-Self): What you don’t want to exhibit. It basically means being selfish, spiritually and otherwise, and is a one-way ticket to Remedial Earth.

“The Seven”: This is a group comprised of Brother J, five Archangels, and ~AM. They do supersession healings and transmutations when necessary.

TWBs (Tall White Bastards): These are idiot ETs — the dumbest smart ETs you never want to meet. Formerly Neutrals, they fell off the wagon and went Negative. They are about eight feet tall, dead white, hugely bald, and traditionally wear long, shiny black jackets and big black hats. Lately, they’ve become MUCH better at disguise (done via mental projection) and can look like anyone… but they always look stocky or too big. They are very dangerous and should be avoided. Luckily for yo, they only seem to be interested in CATs (since we were 7 yers old). (They are not to be confused with The Watchers, who are distantly related to the TWBs, but are a higher variant and nice. Watchers are about seven feet tall and are technically the highest positive value of Neutral.)

Watchers: Neutral/Positive beings distantly related to the TWBs, but who are a higher variant (and they’re nice, unlike the TWBs who are dickheads). Watchers are about seven feet tall and are technically the highest positive value of Neutral.

[Special note: We decided to remove the “PWB” definition out of respect for the Positive Pleiadians who are now helping The CATs. They are very kind considering how nasty some of their brethren can be.]

[Also note: The information presented here is COPYRIGHTED by The CATs, and cannot be reproduced without permission… esp. as it is part of a future book. All rights reserved.]